WHY CHOOSE A SUPERCHARGER 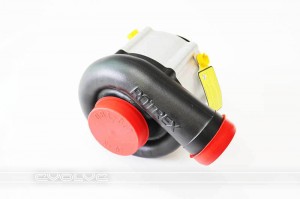 ncreasing the volumetric efficiency of an engine can be done by increasing the swept capacity of the engine or by making extensive internal modifications. A much more efficient method is to add a belt driven compressor – also known as a supercharger. A custom made pulley connected to the crankshaft spins the supercharger via a belt drive system which in turn forces air above atmospheric pressure into the combustion chamber allowing more fuel to be injected, leading to a larger explosion and, therefore, more power.

OUR GOAL WAS TO DESIGN A SETUP WHICH ALLOWED THE ENGINE TO GENERATE THROTTLE RESPONSE EQUALLING THAT OF THE STOCK NATURALLY ASPIRATED SETUP.

Not all supercharger systems are made equal and nor do they perform or result in a setup that responds in the same way. Our goal was to design a setup which allowed the engine to generate throttle response equalling that of the stock naturally aspirated setup, more torque and power through the entire rpm range whilst still maintained the character of the M Power engine.  Most importantly, not just more torque and power on a dynamometer test sheet but under real life transient load on road conditions.

The Rotrex C38-91 was chosen above all of the other superchargers for multiple reasons. The planetary gear system allows for ultra quiet and sophisticated operation against the regular and more noisy gear driven systems on the market.

The self contained lubrication system with an additional oil cooler keeps the unit at sustained lower temperatures under extensive use.

The Rotrex C38-91 delivers over 1100 CFM at 90,000rpm allowing it to equal the very best correctly sized systems on the market but with the distinct advantage of producing more boost pressure and air flow through the rpm range.  More boost through the range allowed us to create a supercharger kit which increased power from as low as 1500rpm. Other supercharger units, while excellent, only really allowed a significant gain in power rpm’s as high as 6000rpm, requiring the engine to be pushed hard to gain any real noticeable increase. With the C38-91 we have the best of all worlds – response, low end torque, full midrange and top end power the M engine is known for.

The S65 water pump, alternator, idler and crank pulleys are all replaced with CNC machined 8 rib equivalents to allow for the upgraded 8 rib system to be compatible.

The crank pulley is enlarged on the supercharger belt run to allow a larger pulley to be fitted to the Supercharger which further improves belt traction , belt life and again, throttle response.
As over engineered as the belt drive system may come across, it is an essential part in allowing the instant power delivery typically associated with a naturally aspirated engine and it works to do exactly what it was engineered to do.

From the very outset the Evolve Supercharger was designed without compromise. No entry level, non-intercooled kits were made available and for good reason.
The Supercharger compresses air which in turn naturally generates heat. Higher temperature air is less dense than colder air. The task of the intercooler is to reduce the temperature before it enters the combustion chamber. Denser air has more oxygen content, more oxygen combined with more fuel equals a bigger explosion and therefore power. 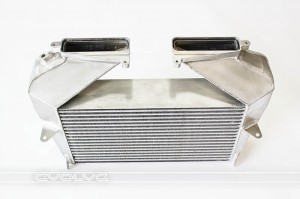 Another very important aspect related to engine safety is that higher temperature air makes the engine more susceptible to detonation which even in small amounts can cause catastrophic engine failure.
While a non-intercooled setup will produce more power, once the engine is loaded for even a small amount of time the intake air temperatures will rise at an exponential rate – leading to engine performance which is extremely inconsistent.

Our initial design was to incorporate a water-cooled intercooler system known as a charge cooler.  After extensive testing our results showed that as the water temperature started rising the cooling ability deteriorated at a rate faster than what we considered to be acceptable and the recovery rate of such setups is a well known problem.
We therefore opted for the more favourable front mount air-to-air intercooler setup which uses air to cool the inlet charge. While the temperatures still rise they also recover faster allowing for a more consistent and superior power delivery.
The task was far more challenging given the space available, however it was worth the additional effort in designing such a system. While intercoolers are known to introduce a small amount of lag, our free flowing design and short path did not allow such problems to arise.
The high end intercooler core chosen was one that gave the least amount of pressure drop while at the same time keeping inlet air temperatures very low with an excellent recovery rate making the kit ideal for all situations, including road and track use.

Twin high quality aluminium 50mm recirculating blow off valves are used in the Evolve Supercharger kit on either side of the CNC plenum chamber which serve a dual purpose.
Using two blow off valves serves as a safety feature.  If there was only one and it were to fail then the excess pressure would not be expelled leading to component damage.
Having two recirculating blow off valves allows the customer to choose the level of blow off noise associated with high power forced induction cars.  With both connected the supercharger system produces very little noise which creates a very sophisticated and quiet system.
One or both can then be disconnected from the recirculating system allowing the valves to blow off directly to atmosphere creating the very distinctive forced induction noise at two different sound levels.
Two aspects of breathing are essential in any supercharger set. One being how the engine breathes and the other of how the supercharger takes in ambient air to compress.
A specially designed recirculating oil ventilation was designed incorporating CNC chambers and high quality silicone hoses to allow the engine to breath and emit the hot oil vapours produced during the combustion process.
This system feeds directly into the CAD and air flow optimised cold air intake tube connected to the rear intake of the Rotrex supercharger. A high quality cotton metal gauze air filter is situated in the lower air duct to allow ambient air to be collected and filtered directly into the supercharger intake tube.
The CAD designed bracket, intake chamber and pulleys are all made from all built from high quality CNC machined aluminium. The supercharger bracket is a 3 piece, ultra stiff and safe design covering the belt drive completely. The plenum chamber is a 2 piece design which incorporates internal directional fins which equally distribute the compressed air across all 8 cylinders which is an essential part of engine safety.  Specially tuned velocity stacks are CNC machined into the base plate to ensure the desired torque delivery.
The aluminium intercooler is hand-welded and produced with the highest quality of core.
The standard BMW MSS60 DME uses a very powerful processor and advanced architecture allowing it to be fully utilised for this application. Larger high flow fuel injectors are supplied. A new OEM air intake temperature sensor boss is located on the correct hot side of the supercharger. Torque management is altered to suit the new increased power. The VANOS is recalibrated to alter the valve timing to fully make use of the increased volume of air entering the combustion chamber. The base fuelling maps and control bytes are recalibrated to suit the larger fuel injectors. Ignition timing and air fuel ratio targets are recalibrated for maximum safety using methods we have learnt from years of experience on OEM forced induction models. Our tuning strategy is designed for maximum safe power whilst retaining all of the standard ECU safety features. 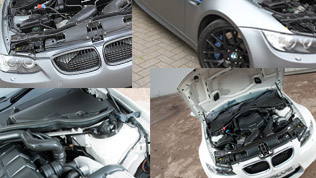 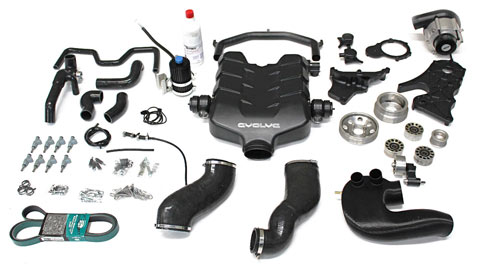